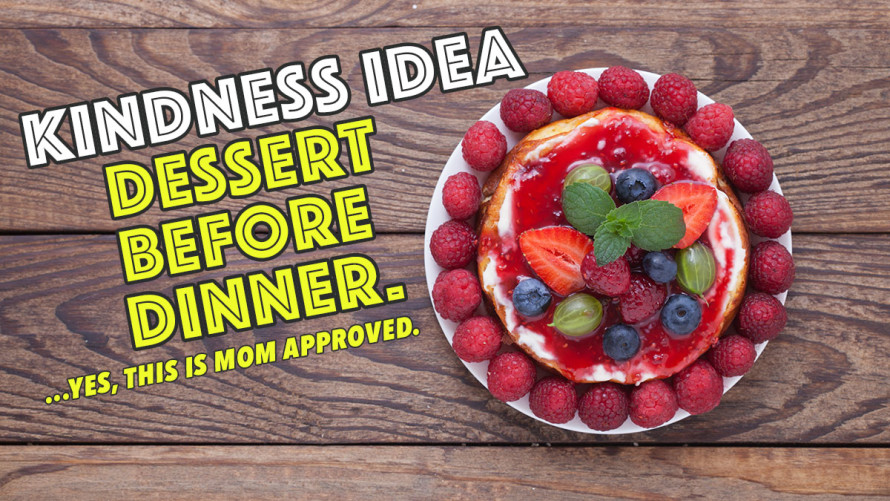 Yes, I said it. Something my mom always refused to do. “Eat your veggies before dessert!”

Before I get into this, do know that there is a backstory to this Kindness idea (read below) and its one that truly made me look at things in a much different light. But lets cut to the chase just incase have only moments to read this post. . .

1. Visit your favorite restaurant.
2. People watch and locate an individual or couple that is waiting for their dinner.
3. Write a note that reads something like, “Kindness is sweet, even before dinner. Enjoy!”
4. Call your server over and ask them to drop a dessert on their table right-a-way, deliver your note and keep it a secret!
5. Watch their response (and share the story in the comments below!)

We often do acts of Kindness without seeing the impact that they have. This is a great and fun way to do something for someone else, keep it anonymous and witness their reaction.

The Backstory
In September of 2011 a racing airplane traveling over 500 mph crashed into a crowd of people in Reno, NV. 10 people were killed and 100’s were injured. At the time, I assisted in the surgery department at St. Mary’s Hospital. On that specific weekend, I was working. It was like a scene out of a WWII movie. People were flooding into the ER. Arriving in ambulances, vans and even a Toyota Camry. They were coming in so quickly that numbers were given instead of names because it was hard to keep up. Staff were helping out anywhere they could. Looking around every injury was severe. Life threatening. I remember thinking, “Of all days, let me do my job well today!”

Several days passed and I was walking through the hospital floors visiting some of the injured. There was one person in particular that I wanted to visit. He lost both of his legs and one hand was still in question. As I walked into his room he was being served dinner. “Oh, excuse me, I didn’t mean to interrupt. I’ll come back in a little bit” I said as his whole family was in the room.

“No. No! Come on in.” He responded and offered me a seat next to his bed.

I noticed that when he was eating his dinner went for his dessert first. I couldn’t help but make a light hearted comment. “Dessert first? Yeah baby! I wish you were my dad!” I said as all his kids started laughing.

But his response was one I will always remember.

“You never know when you last day will come. So, I know pledge to enjoy every sweet thing that comes into my life first.” He said.

Nearly 1-year later I was Keynoting an event held by the Nevada State Governor, Ron Sandaval. The event was to raise funds for the victims of the 2011 crash. At that event, nearly 500 people attended and I asked that dessert be served first.

Moral of the story. . . enjoy the sweet things in life. Family, friends, good weather and yes, even dessert.