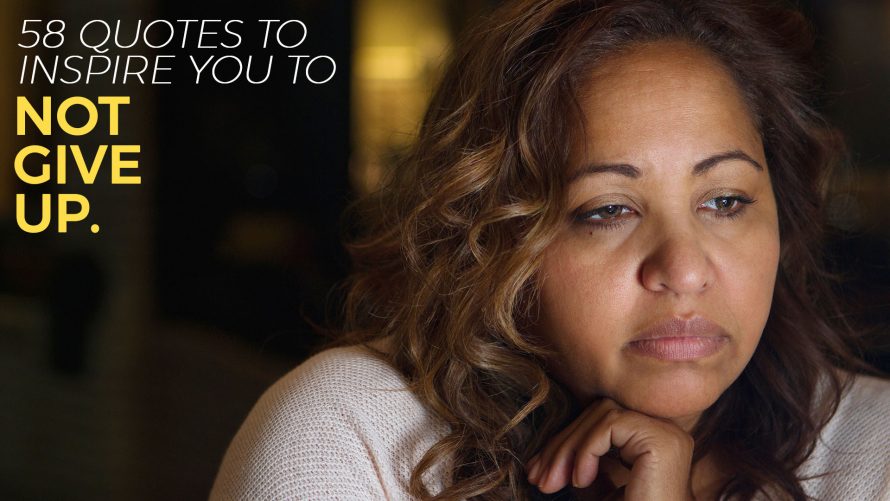 Here are some quotes that remind me and our team to never give up. . . even when the mountain seems to tall, the dragon’s to big or the stars begin to dim . . . DON’T GIVE UP!

“The greatest danger for most of us is not that our aim is too high and we miss it, but that it is too low and we reach it” — Michaelangelo

“Your job as an executive is to edit, not write. It’s OK to write once in a while but if you do it often there’s a fundamental problem with the team. Every time you do something ask if you’re writing or editing and get in the mode of editing” — Jack Dorsey

“The more a person seeks security, the more that person gives up control over their life” — Robert Kiyosaki

“You’re either an entrepreneur, artist or manager. Spend most of your time in that role and you’ll be fulfilled”

“Life is an ongoing process of choosing between safety (out of fear and need for defense) and risk (for the sake of progress and growth): Make the growth choice a dozen times a day” — Abraham Maslow

“It’s a great strength to live knowing that if you lost every material possession, you would still have a life worth living”

“If you don’t believe in yourself, you don’t take massive action. Instead, you take small action which validates that in fact, you weren’t good enough to achieve something huge.”

“The neutralizer to fear is self belief” — Mark Bouris

“One of the huge mistakes people make is that they try to force an interest on themselves. You don’t choose your passions; your passions choose you” — Jeff Bezos

“Age is not based on chronology, but psychology” — Tony Robbins

“See it as it is, not worse than it is just so you have a reason not to try” — Tony Robbins

“It’s not what we get that makes us happy, it’s who we become” — Tony Robbins

“If you don’t know where you’re going, any road will take you there”

“You feel what you’re focused on” — Tony Robbins

“The secret to living is giving” — Tony Robbins

“When you believe it, it becomes self fulfilling” — Tony Robbins

“Always have something to look forward to” — Tony Robbins

“Time is the capital of your life, so spend it wisely” — Tony Robbins

“If you wait until you feel like doing something, you will likely never accomplish it” — John C Maxwell

“Passion is the bridge between goals and accomplishment”- Jim Rohn

“In life you have three options with any situation that is a challenge. Remove yourself from the situation, change it, or accept it” — Dr Phil

“You do things when the opportunities come along. I’ve had periods in my life when I’ve had a bundle of ideals come along, and I’ve had long dry spells. If I get an ideal next week, I’ll do something. If not, I won’t do a damn thing.” — Warren Buffett

“The joy is in creating, not maintaining” — Vince Lombardi

“I make it a personal rule never to do anything that I don’t really care about. It is surprising how much this cuts out” — Richard Koch

“It’s through our expenses that we become richer or poorer, regardless of how much money we make” — Robert Kiyosaki

“If a man will devote his time to securing facts in an impartial, objective way, his worries will usually evaporate in the light of knowledge” — Herbert E. Hawkes

“The more communities in which you are an active participant, the more likely it is that you’ll be happy” — Ted Leonsis

“Power begins with your own self perception” — Siimon Reynolds

“The only way you grow is by being uncomfortable” — Scott Harris

“It doesn’t matter what you achieve, if you don’t keep growing you’ll feel dead”- Tony Robbins

“To influence yourself, you have to ask better questions” — Tony Robbins

“If you’re bored with life, if you don’t get up every morning with a burning desire to do things — you don’t have enough goals” — Lou Holtz

“Your destiny is determined by your decisions” — Tony Robbins

“If everything seems under control, you’re just not going fast enough.” — Mario Andretti

“The person who has the guts to ask themselves ‘Why?’ at least once a week, and be totally honest with themselves about the answer, is already twenty steps ahead of their smarter, more experienced rival” — Mark Bouris

“What you allow is what will continue”

“Self belief will always push fear away, but you need to always practice self belief otherwise fear will come back and tap you on the shoulder” — Mark Bouris